Can religious involvement help our youth transition into adulthood? 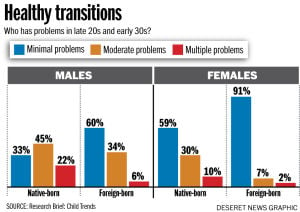 Close relationships with at least one parent, caring teachers and religious involvement have lasting power to ease transitions as youths move through young adulthood, according to a new pair of research briefs by Child Trends.

The researchers found that when kids have caring relationships with one or both parents, the likelihood increases that they will have fewer challenges in their late teens and early 20s — even stretching into their mid- to late-20s and early 30s. The same is true for those young adults who felt as they grew up that teachers cared for them or who were involved in consistent religious activities, according to the firstreport, subtitled “The Role of Supportive Relationships and Regular Religious Involvement.”

The second report focused on “characteristics associated with a lower-risk transition” to adulthood, examining potential problems like heavy drinking or drug abuse, criminal activity and money trouble. It found that young people who in late teens and early 20s manage to avoid those issues don’t usually pick them up later. Even those who had “moderate or multiple problems” tend to face diminishing issues with them as they age.

The report characterizes ages 18 to 29 “as a period of emerging adulthood” as young adults increasingly put off milestones like marriage, careers and parenthood in favor of education and self-discovery.

The researchers used data from the National Longitudinal Study on Adolescent Health, looking at “waves” of information gleaned from interviews with roughly 11,500 young adults beginning when they were 11 to 19 years old in 1994-1995. They analyzed 13 years’ worth of data to determine whether those subjects were poised to make healthy transitions into adulthood.

Not all the same

Groups of young people are different, and some of the findings buck popular notions. For example, whites and males don’t do as well overall with challenges as female or foreign-born young adults, the research said.

“I think that’s a valuable thing to know,” said Kristin A. Moore, Child Trends senior scholar, who wrote the report with colleagues Mary A. Terzian and Nicole Constance. “People think immigrants are more likely to be in this category. No. It’s native-born. I have no idea why that would be.” Easier to understand is the struggle of young males, she added; they can’t always find decent jobs and lag in terms of obtaining higher education.

In another counterintuitive finding, the researchers also learned that “young adults who as adolescents reported that their friends cared about them ‘very much’ were more likely to have a high-risk transition to adulthood.” The reason is not well understood and begs for more study, Moore said, adding that while most peer relationships are positive, it’s not uniformly true. “Often we don’t know the values or behaviors of peers.”

While polling shows many American adults think most kids have lots of problems, the reality is that a substantial number have very few, Moore said. Of those who do, the majority are not severe. When the researchers examined a set of risks for poor outcomes during the transition to adulthood, they found that “most kids don’t have those risks or have moderate levels of those risks.”

Those who have problems in early adulthood tend to get better over time, she said. One reason may be simply gaining some maturity. Brain development continues until around age 25. Also, some mitigate challenges by finding informal or formal support of some kind. Even gaining experience and earning more money provide some relief.

Because relatively few have multiple or severe problems, “we could focus some resources in helping (those that do) do better,” said Moore, who called use of evidence-based, effective programs to help people overcome drugs and behavioral problems a good investment. Young adults are often not offered much in the way of help or guidance, she said.

“The public is quite supportive of interventions for young children and even adolescents to some extent. But there is kind of a punitive orientation” with older individuals who make mistakes or have problem behaviors, although proven interventions could help them, she noted.

The researchers said weekly participation in religious services or youth groups is positive and the benefits last past young adulthood. It didn’t matter which religion; adolescents who attended weekly services “had 64 percent higher odds of belonging to the lower risk, minimal problems group” more than a decade later.

“There’s strong literature that finds pretty consistently that being active in a religious organization is positive,” said Moore. She said that religiously involved youths are less apt to have sex but are less likely to use contraception if they are sexually active.

As for degrees of benefit, those who felt when young that their teachers cared for them had 59 percent higher odds of few problems, while having a close relationship with at least one parent provided 29 percent better odds.

Perceiving that peers cared a lot lowered the odds of belonging to the lower-risk group 27 percent.

That relationships matter to a young person’s future is no surprise tp Carolyn Pape Cowan, adjunct professor emeritus of psychology at University of California Berkeley. She was not involved in the Child Trends research, but has with her husband Philip Cowan long studied youths and how they thrive or fall behind.

“What we do know is that from birth to the teenage years, when kids have parents with fewer mental health problems, when they have good relationships and more effective parenting strategies, they do better.”

Adults are crucial to how children do emotionally, developmentally and academically, she said. “It means if they have adults who are satisfied enough and effective enough in their lives, who can care for and support these kids and believe in them, it makes a huge amount of difference.” She said that even when kids are getting into a little bit of trouble, if the adults in their lives believe in them and encourage them and help guide them, they do better. “It means a great deal to how they feel about themselves and the goals they develop.”

The circle of help for emerging adults extends beyond teachers and schools, Moore said. Mentors, coaches, religious contacts, distant kin and others can all have positive impact.

“But we find the kids with the greatest needs are the least likely to have those positive relationships,” she said.

Development is lifelong, and research supports the notion it’s never too late to try to help or care. Moore said baby boomers, for example, could get involved. They are often healthy, their children grown, so some could choose to step up for kids through government programs, private organizations, religious groups or other mentoring opportunities.

“We know that kids who have severe stress and difficulties and not a great deal of effective parenting in their home environment can have teachers or pastors or rabbis or community leaders or Scout leaders who make a great deal of difference,” Pape Cowan said. She added those people tend to listen and not criticize.

Rabbi Gary Katz serves the Tri-State Area (NY, NJ, CT). Feel free to send an email with any of your questions or requests.
646-201-4904
A rabbi for every occasion.
A relationship for life.